Accumulating some links for M6.4 Tonopah area Nevada earthquake May 15, 2020

An M6.4 earthquake occurred this morning in SW Nevada 56 km west of Tonopah and 202 km ESE of South Lake Tahoe. It was widely but lightly felt across southern Nevada and the central California from the Sierra Nevada to the coast. It occurred in an area of NW-oriented dextral shearing called the Walker Lane. The size of the event would suggest that there is surface rupture. Fortunately, it is an area of low population density so hopefully no one was hurt and the damage is low. Aftershocks are continuing. 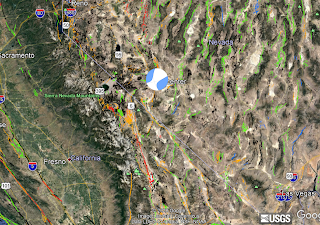 I am collecting some links in this blog entry:

Posted by J Ramón Arrowsmith at 6:02 AM No comments: