Mapping landforms with applications to geomorphology and earthquake geology EXERCISE

I wanted to share a project I have developed on and off for about 10 years. It is a classroom exercise for Mapping landforms with applications to geomorphology and earthquake geology. So far, it has an example for strike-slip faults (Wallace Creek along the San Andreas Fault), and blind thrust faults (Wheeler Ridge in Southern California). I have an intention to add a normal fault example but have not finished it yet.

The basic idea is that the exercises could be done "analog"--that is on paper in a classroom. They emphasize some simple morphologic and geomorphic mapping (but on high resolution topography base maps from lidar data collected by NCALM and available for download from OpenTopography), and then provide landform ages so that students can calculate slip rate or surface uplift rates. I am not sure they are so well explained so any feed back is welcome.

Posted by J Ramón Arrowsmith at 2:34 AM No comments:

DEM grid size specification and learning a bit of TopoToolbox

I have been wanting to learn TopoToolbox for a while, and last week I had a chance to get started. Spending time at the Universität Potsdam, Institut für Erd- und Umweltwissenschaften, I have met with Wolfgang Schwanghart and Dirk Scherler occasionally. They are coauthors of TopoToolbox.

My ASU colleagues Adam Forte and Kelin Whipple have been using TopoToolbox increasingly over the last few years. Recently Kelin had a question as to why some DEMs grids were causing an error in TopoToolbox and why some were not. I dug into it and here is what I found. Projected DEMs should have EXACTLY the same x and y cell sizes and expressed in precise values (nearest meter or 10th or 100th of a meter).


DEMs (such as SRTM 30 meter) can be downloaded as geotiff formats and with geographic coordinate systems from sources such as OpenTopography: select Global Data tab. 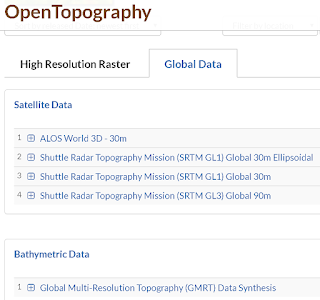 For example, I have chosen a piece of data from Java along the Cimandiri fault (see Marliyani, et al., 2016 for example).

To be useful for most geomorphic analyses, the data should be projected to UTM so that the horizontal and vertical units are the same. Often, the projection is done in ArcGIS. And, usually it seems fine to let Arc determine the cell size automatically. 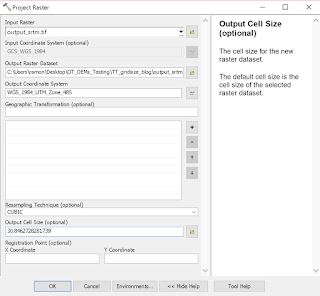 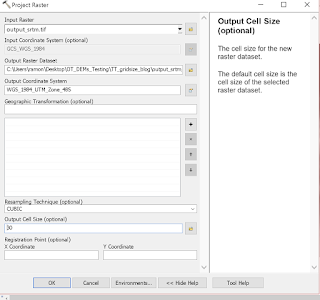 Here I set the cell size to exactly 30 m


Turning to TopoToolbox, as we compute drainage network properties, including contributing area, there is a check that the cell sizes are the same (inside the GRIDobj.m function):


The 1e-9 is a somewhat arbitrarily small number which one would think would not cause a problem.

I looked into this problem tracking along with the TopoToolbox processing and some of the MATLAB built in tools.

If I run the same set of checks on the file I projected with exactly 30 m grid cell size (recall above), I don't get the problem:

I think what is happening is a bit of roundoff error (see this link for detailed discussion: What Every Computer Scientist Should Know About Floating-Point Arithmetic, by David Goldberg): "Therefore the result of a floating-point calculation must often be rounded in order to fit back into its finite representation." MATLAB does all of its calculations by default in double precision, so we should have access to 16 decimal digits (e.g., https://en.wikipedia.org/wiki/IEEE_754-1985). So, why we loose precision up to 10-9 at times is a little surprising to me, but it can obviously happen.

Thus there are a couple of workarounds:

Here is a script to run these calculations: DEM_cell_size_Script.m

Posted by J Ramón Arrowsmith at 8:12 AM No comments:

I just returned from a very interesting and pleasant field trip in Himachal Pradesh (India) to examine the major elements of the frontal portion of the NW Himalaya. The trip was lead by Dr. Rasmus Thiede of the University of Potsdam (UP). This was my third trip to the Himalayas (the first in 2001 to the Sutlej and Spiti Rivers with UP colleagues including Rasmus and Bodo Bookhagen when they were starting their Ph.D.s under the supervision of Professor Manfred Strecker; the second was in 2010 with Dr. Wendy Bohon in the Ladakh region to contribute to her work along the Karakoram Fault in the Pangong Range area). We joined two UP students (Katharina Kretzschmar and Markus Nennewitz) who had been working in the area for two weeks already, focusing on developing a structural profile across the principal faults of the NW Himalaya in the region. I overlapped for a day with Dr. Saptarshi Dey who worked on his Ph.D. with Rasmus in the Kangra reentrant (see Dey, et al., 2016a,b). And, it was a pleasure to meet Professor Vikrant Jain from IIT Gandhinagar and his Ph.D. students. I did not (yet) get their last names but they were Ramindran, Sonam, and Pritha. Tashi Gyatseo is a long-time guide and friend of Rasmus who was chief of logistics for the trip. It was fun to meet everyone and to discuss the geology and geomorphology as well as learn a bit more of eachother's cultures.

Along with strengthening the collaborations among the groups, there were a couple of scientific targets of the trip. They build to a large degree from the Ph.D. work of Saptarshi Dey and focus on:


So, we looked at a lot of interesting fluvial terraces mostly along the Ravi River system as well as reviewed the major structural elements of the system: HFT, Siwaliks, Main Boundary Thrust (MBT), and the Main Central Thrust (MCT). 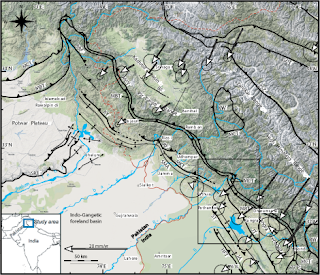 Overview figure of the region from Gavillot, et al., 2016. The box shows the location of our trip and the map shown below. 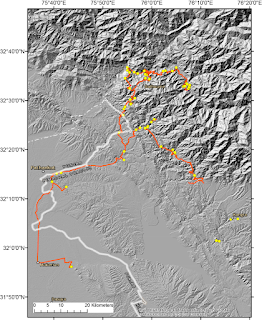 Overview of the field trip with the orange-red line showing most of our tracks and the yellow points my main obversation locations. I am using the GaiaGPS app for my mapping. It seems ok but I might look for a more geologically oriented app for the next trip. 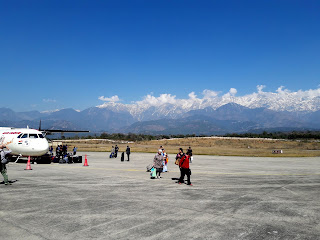 View of the nice mountains (Dhaula Dhar Range) from the Kangra airport--a nice way to start the trip! 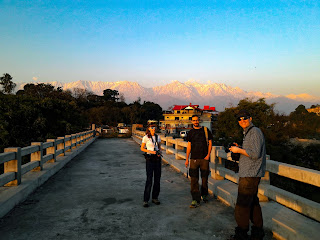 Katharina, Markus, and Rasmus with the impressive Dhaula Dhar Range behind as seen from the Kangra area. 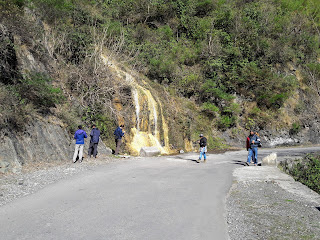 Most of the group at a stop along the Main Boundary Thrust where a spring may indicate increased permeability along the fault zone (yellow-white material at left is travertine). 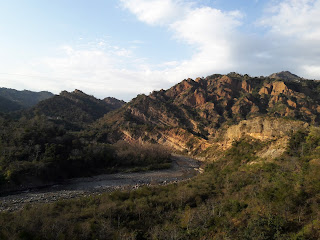 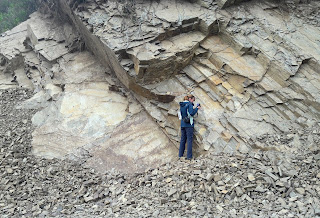 Katharina in the MCT mylonites. 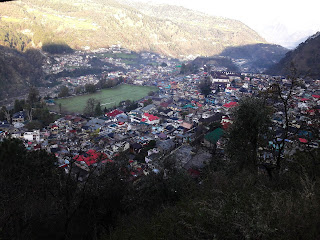 Chambo Town--built on an important probably 10 ka terrace. We spent a pleasant cool night there. 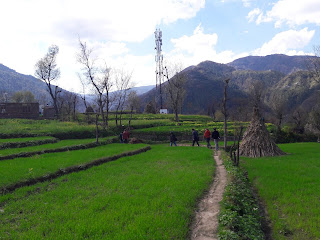 Pretty agricultural terraces on a high terrace south of Chamba. 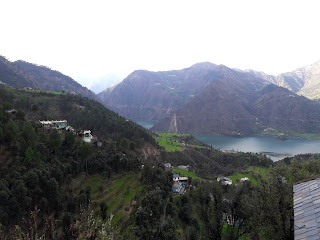 Nice terraces near the Chemera Reservoir. 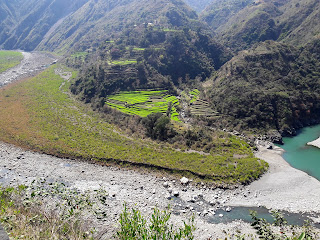 Stair step terraces in a tributary a few km below the Chemera Reservoir. 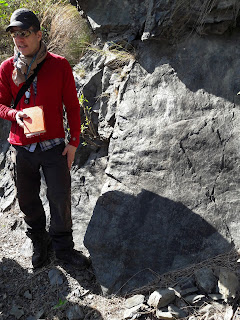 Rasmus is a great teacher and it was wonderful to learn from him. Here he is near some fine grained schists discussing their reflection of the overall deformation in the MCT zone.

Posted by J Ramón Arrowsmith at 11:16 AM No comments: