For some "light reading" over the winter break, I have enjoyed a read of oral histories of Clarence Allen (Caltech) and Robert Wallace (USGS).
EARTHQUAKES, MINERALS AND ME: WITH THE USGS, 1942-1995 by Robert E. Wallace; Oral History Interviews With Stanley Scott; USGS Open-File Report 96-260

Connections EERI Oal History Series: Clarence Allen with interviewer Stanley Scott
CLARENCE R. ALLEN (1925-2021) INTERVIEWED BY DAVID A. VALONE Caltech archives. This latter one has a bit more about Caltech and is slightly less polished than the first.

Maybe I at times too sentimental, but I found these personal and scientific histories throught provoking and inspiring, not only for their tellings of important steps in the history of earthquake science and service, but also for their modest, laconic, and matter of fact story telling. I am also fortunate to have substantial memories of interacting with both of them personally and also of the transition at the end of their careers and the beginning of mine (I entered graduate school at Stanford University in Fall 1989). I also appreciate the effort of EERI to accumulate those and other oral histories.

One thing that comes to mind is that it would be nice to include some histories from women who have contributed in these areas. I will work on that for a future blog post.

Bob Wallace was inspiring as an earthquake geologist. I followed some of his work quite closely as I shared an obsession with geomorphic indicators of faulting, although certainly with less of an impact...
Just a couple of examples from his papers:

THere is a lot more to say and remember about Bob Wallace. My memories of him are also tied to Kerry Sieh who worked with Bob and honored him by naming the offset channel he explored in the 1968 paper "Wallace Creek". How many times have I read the Sieh and Jahns 1984 paper: Sieh, K. E., and Jahns, R. H. (1984). Holocene activity of the San Andreas fault at Wallace Creek, California. Geological Society of America Bulletin, 95, 883–896.. We even revisited this in our 2019 paper.

One of my San ANdreas Fault tour videos over the Carrizo Plain. Hillshades produced by me from the B4 project at OpenTopography.

I did not interact with Clarence Allen as much as I did with Bob Wallace, but I did have a few nice conversations with him. I think he was more serious in the conversations than I was. They main ones were when I was thinking about going to Caltech to work with Kerry Sieh. Clarence and I talked about science, but also about trout fishing. I regret never taking him up on an invite to fish in the San Bernardino Mountains. I think my father had fished some of the same places there around and below Lake Arrowhead or Big Bear Lake.
Two papers among many I would like to highlight from Clarence: 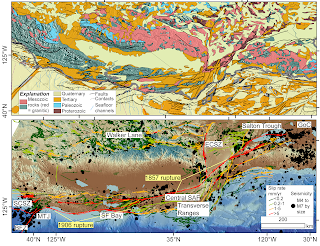 My recent attempt to follow Prof. Allen's ideas about the San Andreas Fault (some edits on the caption from Mike Oskin; we made this as a prototype for a SCEC request). The geology of the plate boundary shows the SAFS progressively dismembering the former subduction system (as indicated by the paired Mesozoic metamorphic--green and granitic--red rocks) (https://ngmdb.usgs.gov/gmna/; upper panel). This framework is a first order control on the behavior of the system (lower panel): active faults (USGS and CGS 2021) and M>4 seismicity (https://earthquake.usgs.gov/earthquakes/search/) overlain on the GMRT (Ryan, et al., 2009).
Posted by J Ramón Arrowsmith at 1:34 PM