The SoSAFE activity was a very successful data gathering and interdisciplinary science rallying activity in the Southern California Earthquake Center (SCEC) for 10 years. Its early leader was Dr. Ken Hudnut from the USGS. The original aspiration was to develop understanding of the last 2000 years of activity along the Southern San Andreas Fault. I was fortunate to be invited to help co lead SoSAFE in 2011. Dr. Kate Scharer (USGS) was the other co-leader. Her recent research has been largely focused on understanding the southern San Andreas Fault paleoseismic history. I very much appreciated the chance to work with Kate to help coordinate the research activity of SoSAFE withing SCEC as part of its Planning Committee. Our main efforts included evaluating proposals and helping coordinate and promote the research of our colleagues. We did a few additional activities including the "FieldShop" in which we made a group field trip to discuss and assess small offset landforms along the San Andreas Fault Mojave segment near Pearblossom. The outcome of the FieldShop was a paper lead by Kate: Scharer, K. M., Salisbury, J. B., Arrowsmith, J R., Rockwell, T. K., Southern San Andreas Fault Evaluation field activity: Approaches to measuring small geomorphic offsets and challenges and recommendations for active fault studies, Seismological Research Letters, v. 85, no. 1, ppl 68 - 76, 2014. In addition, we also organized (along with Prof. Mike Oskin from UC Davis) the SoSAFE and Earthquake Geology Geochronology workshop in 2014. The discussions of novel applications of geochronology for earthquake geology were really interesting and helpful for the community. SoSAFE has been sunsetted as an activity within SCEC as it moves into its 5th iteration (SCEC5). Much of the important work of SoSAFE will be subsumed (and hopefully continued) in the San Andreas Fault System Working Group to be led by Kate and Prof. Michele Cooke (UMass). It makes some sense I suppose as a refresh on SCEC structure, but I and others are concerned about the loss of emphasis on paleoseismic data gathering.

In our last SoSAFE activity, Kate and I organized a workshop for Sept. 10, 2016: SCEC SoSAFE Workshop: Recent Successes and Future Challenges. The workshop had 3 main themes:


The workshop was well attended (we capped it at 40 people, but many more wanted to join).

Several synthesis points were evident from the presentations and discussions:


The early afternoon featured thought provoking talks about paleoclimate and paleoenvironmental chronologies. Here are a few of my takeaways:


Many thanks to our colleagues for their great ideas and community spirit in support of SoSAFE. Adieu!!

Posted by J Ramón Arrowsmith at 12:42 PM No comments:

Nancy Glenn (Boise State) led a training workshop with Chris Crosby (UNAVCO), Tristan Goulden & Shelley Petroy (NEON), and me this last week on topographic, geomorphic, and vegetation analysis with lidar. We emphasized the NEON project and its substantial Airborne Observation Platform with its lidar scanners. Tristan is the Remote Sensing Specialist with lidar expertise for NEON and in charge of those acquisitions. Shelley is the data products lead for all of NEON. It was quite interesting to learn more about NEON and also to see the interesting interdisciplinary opportunities for research. The participants came from a range of backgrounds and were a pleasure to meet and work with. 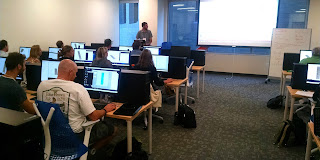 Shelley Petroy and Chris Crosby sharing their knowledge with the group

The workshop web site has some good lecture and exercise/tutorial content (look towards the bottom at the "Workshop Material" link. I built some simple videos (look for playlists on NEON Points to Raster and NEON OpenTopography, Topographic Metrics and Drainage Network) demonstrating some aspects of the tutorials. At OpenTopography, we have started to distribute NEON lidar data (NEON D17 Pacific Southwest- California).

We had a great time in Boise. The classroom was excellent and Nancy was kind to schedule a civilized stop time in the afternoon so there was time for a run before the pleasant evening receptions. Below is a picture from above Boise: 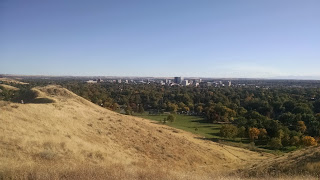 An interesting coincidence was that at the same time as our workshop and in Boise was the Subduction Zone Observatory Workshop. I could imagine having been at that meeting too!

Posted by J Ramón Arrowsmith at 8:14 PM No comments:

Introduction to Structure from Motion (SfM) Photogrammetry for Earth Science Research and Education short course (Sept. 24, 2016 at the GSA meeting)

Chris Crosby (UNAVCO), Ed Nissen (Colorado School of Mines), and I recently ran a one day short course at the Geological Society of America Meeting on an Introduction to Structure from Motion (SfM) Photogrammetry for Earth Science Research and Education. We had a good time sharing our enthusiasm for Structure from Motion with the group of 25 or so enthusastic participants. They came from a range of backgrounds as educators as well as researchers in active faulting, geomorphology, sedimentary geology, engineering, and more.

The course web site has some very useful content lectures and exercises. And, Chris reminded us of some quite helpful SfM docmentation that he and Katherine Shervais put together:


The workshop was co-sponsored by UNAVCO as well as OpenTopography. At OpenTopography, we are staring to provide SfM data and are working to build a drag and drop capability for user contributed correctly documented SfM datasets. 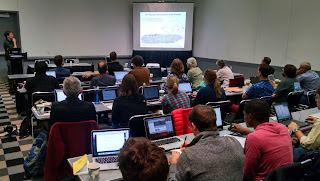 Ed Nissen giving the Introduction to Structure from Motion
Posted by J Ramón Arrowsmith at 7:47 PM No comments: