An M6 strike-slip earthquake occurred in the northern San Francisco Bay area last night (3:20 am local time). It is reported as 6 km NW of American Canyon and between Napa and Vallejo. This is the biggest event in the Bay Area since the 1989 M6.9 Loma Prieta earthquake. Aftershocks are following and will continue. Not a lot of additional data and interpretation are yet available, but they will be soon! There might be some surface rupture, and there should be coherent ground cracking (could end up being a semantic point!). There will be a lot of landslides, and there seems to be structure damage in especially some of the older brick buildings in the region. It sounds like people have been injured from falling debris. I hope everyone will be ok. The Did You Feel It mapping shows that shaking was very strong to severe in the north Bay area and it was felt widely across the region.

The UC Berkeley Seismological Laboratory and the Southern California Earthquake Center Data Center (link) have nice maps and lists showing the location of the main shock and the aftershocks elongate along the rupture zone. There is some useful commentary about the faults and their recent activity at the bottom of the main Main USGS page on the event. 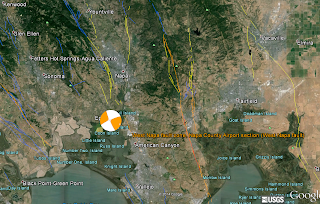 Here is a kmz of the hillshaded digital elevation model (Napa watershed gathered by National Center for Airborne Laser Mapping in 2003) at 2 m resolution of the area of the main shock (click to download the kmz): 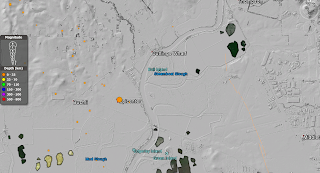 I georeferenced one of the maps from the Wesling and Hanson final technical report (click to download the kmz). Lineaments are targets for field survey: 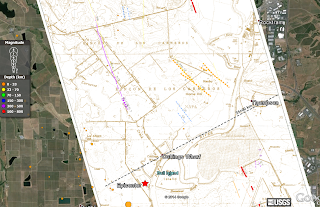 Here is folder with georeferenced images.

I notice a Plate Boundary Observatory station not far from the southern end of the likely rupture zone (P261), but no updates yet for today to see a change in its position. There are also borehole strainmeters that apparently felt the squeeze.

Here are a few links:

Posted by J Ramón Arrowsmith at 7:13 AM No comments:

Dramatic weather today! Looks like as much as 4” rainfall in the last 24 hours in the northern part of Maricopa County drove lots of exciting runoff. Here are a couple of links from the Maricopa County Flood Control District for a data-oriented view of rainfall and runoff:
http://www.fcd.maricopa.gov/Rainfall/rainfall.aspx -- main page.
http://www.fcd.maricopa.gov/Rainfall/Raininfo/raininfo.aspx -- links to tabular rainfall reports.
http://alert.fcd.maricopa.gov/alert/Google/v3/wx.html -- this is a good data page (Mobile version. Click on the Dataset tab and you can see some different maps (1 day rainfall or Streamflow data for example). Click on a station and a little window will popup and you can see various measures versus time. There is a “plot” link at the bottom of the popup and you can see a plot of precip or streamflow versus time at that sensor.
For example, I see the 5568 Skunk Creek at I-17 pressure transducer indicates more than 12,500 cubic feet per second today about 10 am (this link on the sensor suggests that 12,100 cfs is the 25 yr flood).

If you click on the layers tab, you can see a number of different data products including those from radar.

There is another page that makes maps: http://www.fcd.maricopa.gov/Rainfall/ALERT/rainMaps.aspx -- select a map and then click make map and you can then click on a gage to see some tabular data.

Both sites are a bit clunky but can be entertaining. The Flood Control District maintains a pretty impressive sensor network.

Posted by J Ramón Arrowsmith at 6:21 PM No comments:

I recall as a graduate student how revolutionary the electronic total station was. I became completely obsessed, and wrote a user manual (after some spectacular failures in the field with my advisor who I think was ready to send me home...). While the original version was written in 1993, I did not put it online until 1999 or so: Total station manual. Koji Okumura also put together a nice guide about the same time: Koji's Digital Mapping Homepage.

I was really interested in both the technical aspects of the measurements, but also the power that they provided in mapping topography and structures for example. I recently reread this nice paper from others who shared my enthusiasm at about the same time: Philpotts, et al., The electronic total station--a versatile, revolutionary new geological mapping tool, Journal of Geoscience Education, v. 45, p. 38-45, 1997.. I wanted to write a similar paper.... Along with a nice review of the basic operations and applications, this paper has a bit of vector analysis that is handy to remember for the processing of any x y z data. I tackled a bunch of that material, especially applied to faults and stress in the Advanced Structural Geology class (week 13).

Time passed and what would take a day to do with the total station (1000 shots) can be done in far less than a second with LiDAR (see the vast holdings and our educational efforts at OpenTopography or Structure from Motion (see for example these SfM posts) topography, but the principles are similar.

Here are a few old images and projects:

Topographic map from the Hog Lake site along the San Jacinto Fault (project lead by Tom Rockwell). This site has a lot of nice maps and photos.

3D view from surveys at the Montroig Golf Course along the El Camp Fault in southern Spain (from Field training course in paleoseismology Cambrils, Spain, Februrary 2-11, 2001). This site has a lot of nice maps and photos.

Posted by J Ramón Arrowsmith at 2:56 PM No comments: