Kate Scharer (USGS), Mike Oskin (UC Davis) and I organized a geochronology workshop for the Southern California Earthquake Center community this fall. We emphasized methodologies useful for investigating fault slip behavior over time scales from 102 to 106 years. That included Terrestrial Cosmogenic Nuclides, Uranium Series, and Optically Stimulated Luminescence. We did not talk so much about 14C given its relative maturity, but we certainly recognize its continued value. 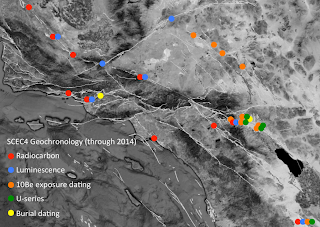 Kate lead the charge on the completion of the workshop report. It has a nice summary of the topics covered (here is the original agenda). I had a sense of a real acceleration in the number and quality of applications of the methods and the resulting rich depiction of deformation rates and their variations across time and space in Southern California. I was particularly moved by the climate modulation on the development of landforms (alluvial fans, channels, etc.) that serve as markers as well as the possible temporal coherence of wet and dry times across the region. I think that this modulation and coherence can be exploited with more intensive application of geochronology.

I learned a lot more geochronology, especially having just been at the EarthScope Geochronology Institute a week or so earlier--note that the talks and some of the videos are up (where we covered some similar topics and where Kate was a speaker on 14C). It was very nice to see many SCEC friends and colleagues.