Professor Emeritus of Geology Donal M. Ragan passed away in February 2019. Unfortunately, I had lost some contact with him in the last years. However, I was first hired on in 1995 at ASU to take Don's position (from which he had retired) and teach Structural Geology. He was still active, working on his book and so he came by often to talk with me and my students (especially George Hilley). Don and his wife Janne were also kind to have me over for dinner occasionally. They were very generous. This memory of Don is incomplete, but I wanted to capture a few thoughts and recollections. 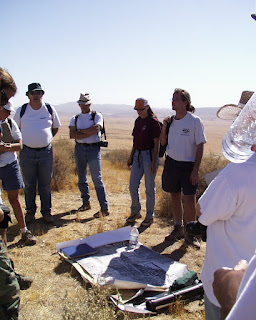 This is the only picture I could find of Don. He is there on the left (along with Lee Amoroso, Jeri J. Young, and George Hilley) during a field trip to the Carrizo Plain in the late 1990s.

I don't have all of Don's biography. I recall he was born in southern California and maybe went to Occidental College. He was in the Army and talked about the discipline and repetitiveness of learning how to dissassemble and assemble a machine gun. He went to the University of Washington where he worked on deformation in the Twin Sisters Dunite. He was at Imperial College where he worked with John Ramsay. He moved to the University of Alaska (UAF) and published on deformation associated with glacial ice (e.g., Ragan, 1969). He moved to Arizona State University in 1965 at the behest of Prof. T. L. Péwé who had been hired to be chairman and who knew Don from UAF.

We worked a fair bit with Don on MATLAB implementations of his exercises and ideas. A couple are here. And, he was an avid LaTEX user having had problems in the 3rd Edition of the book when he did not have good control over the copy editing and production. He taught us about dashes and quotes.

In 2000, Don taught a series of lectures on Structural Geology. I helped a bit mostly as coordinator and provider of moral support. These reflected the development for the book and all I really have are the handouts and figures for transparencies and a few notes:

Don was outspoken about quantitative approaches in structural geology: "Despite all this effort one can still find in professional articles statements that violate basic laws of physics and in some current textbooks there are important omissions, misstatements, misinterpretations and errors when dealing with structure making processes." (from his review of The Life of Frank Coles Phillips).

I worked with him for a while on the 4th edition of the textbook, but did not contribute enough in time to stay a coauthor. Nevertheless, I learned so much from Don and did what I could to apply those lessons in the GLG310 Structural Geology and the GLG510 Advanced Structural Geology courses. We talked often about how to teach structural geology and how to bring more quantification and precision to it. We followed the developments of the structural geology textbook (FSG) of Professor David Pollard at Stanford. Don and I wrote a short review of an early version of a manuscript on kinematics and mechanics here. Don wrote a blurb for the book: "This is the best book on structural geology in a long time. It is both rooted in classical mechanics and visionary. In their characteristic fashion, Pollard and Fletcher lay out the physical concepts and tools needed to understand the structure-making processes and give many examples of their use. If you have any interest at all in the subject read this book, but be prepared to work. You’ll be glad you did." 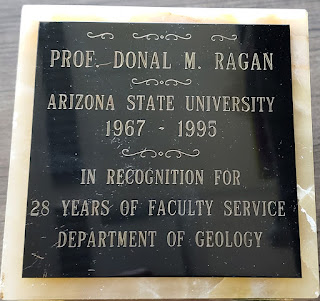