I have prepared a summary presentation on the earthquake sequence. The July 17 versions here here: PDF and PPT. They are comprised of material harvested from publicly accessible sites, so I am hoping it is ok to redistribute in this form; I have provided attribution. Let me know if something needs to be udpated.

And then the the 4th of July event was a foreshock. As I mentioned below, there was a 9% probability from the USGS that the July 4th event would be followed by something larger, and it actually was. I hope that people are ok; will take until the morning to have a better sense of damage and injuries.

I am regularly updating this page, so occasionally refresh.

Tonight's event is clearly part of the same sequence, although this was along the NW-trending section (and was right-lateral). This is an impressive conjugate pattern (right lateral along the NW orientation and left lateral along the NE orientation). Both orientations and senses of motion are consistent with the overall shear zone deformation in the area. It looks to have ruptured across the Highway 178. There are also lots of mass movements in the area (lots of dust kicked up in videos, and also rock falls onto the roads, etc.).

This event was an M6.9 refined from the M7.1 initial estimate. This is a half magnitude unit larger so it was ~10x more energy, hence the broader felt extent (more people in Phoenix and Las Vegas noted it; e.g., my colleagues and my sister...). If you felt (or not) good to fill out a report. This one will certainly be followed by many aftershocks, and there is again a small chance that a larger one could follow. (Omori’s law: ~logarithmic decay in time for event rate (ratio of big to small aftershocks stays the same.) But you can also think of these events close in time and space as epidemics (epidemic type aftershock sequence, most that follow are smaller, but sometimes a bigger one can follow as we have seen). An event of the July 4 size could be an aftershock now... 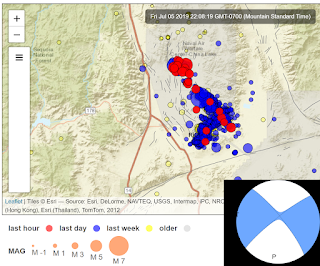 Locations from http://www.scsn.org/ and the focal mechanism from USGS. Compare this with the similar one below.

ASU recording: http://earthquake.asu.edu/EQplots/ci38457511.pdf; thanks to John West and Ed Garnero

A 4th of July earthquake with an impressive conjugate aftershock pattern in the Eastern California Shear Zone. 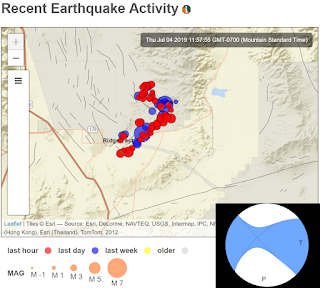 Locations from http://www.scsn.org/ and the focal mechanism from USGS.

Deferring to USGS/CGS colleagues for the real interpretation, but this looks to be consistent with maybe a primary rupture on one of the trends and then aftershocks climbing up the other. Given the magnitude and length scaling, for the moment, I am going to guess the rupture was on the NE trend and would be left lateral with a few 10s cm cracking (based on image below could be Little Lake Fault zone?). This is also consistent with the conjugate fault pattern mapped in the region (see NW and NE-trending faults on map below).

It has a vigorous aftershock sequence which is consistent with expectations. The USGS is employing Operational Earthquake Forecasting to provide probabilistic statements about expected aftershocks in the region. 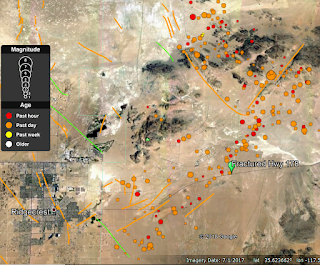 Locations and active faults from USGS. Fractured Hwy 178 from @neotectonic

It was widely felt in California: USGS DYFI. This is a good reminder about earthquake safety.