I was cleaning some files yesterday and I found an old exercise I had deployed when I was first teaching Introductory Geology. It was intended to help students understand earthquake intensity (vs.) magnitude. I took the felt intensities as reported by D. C. Agnew and K. Sieh (1978), A documentary study of the felt effects of the great California earthquake of 1857, Bull. Seismol. Soc. Amer., vol. 68, pp 1717-1729 and compiled some of the more easily interpreted ones into a table and then provided a simple map of California for the students to map the intensities. Here is a link to the compiled data from Agnew and Sieh. THe work of Kerry Sieh on the 1857 earthquake is seminal. I think it was an ok exercise, but there are probably more interesting and more recent datasets. For example, I like the twitter-based work that is coming from the USGS colleagues. It should be possible to take some sample tweets and do an intensity mapping.

The 1857 earthquake and its foreshocks and aftershocks are fascinating an a sobering reminder of what will happen one day in California. 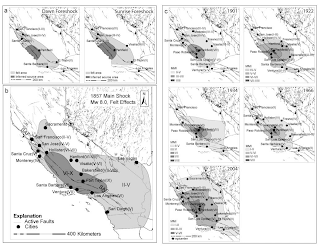 This figure from Toké and Arrowsmith, 2006 shows the 1857 foreshocks and the mainshock distribution (the latter is what the exercise mentioned in the last paragraph is supposed to look like) and compares it with the historic Parkfield earthquakes.
Posted by J Ramón Arrowsmith at 6:31 AM