I became obsessed with diffusion erosion modeling in my PhD work. It is a simple (certainly oversimplified) way to think about how hillslopes may change over time in the absence of mass wasting, debris flow, and fluvial processes. There is a lot to say about it, but I wanted to capture a few items I recently developed.

Here is an explanation and assignment on the topic in my Computers in Geology class: Lecture 8: Exploring diffusion using Excel.

One of the challenges that I have had in some applications is that the computational "space" was too small in the spreadsheet, given that it is fixed. Of course this is not a problem if one dynamically determines the number of time steps for example based on a stability criterion and you do it with a for or while loop in something like Matlab. So, when I was helping Emily Apel with her senior thesis recently, I built her a big spreadsheet (seemed easier given the limited time that she had.

Here is the original spreadsheet with only 27 space steps and 191 time steps. It is good for teaching and quick demos: LINK to Spreadsheet. 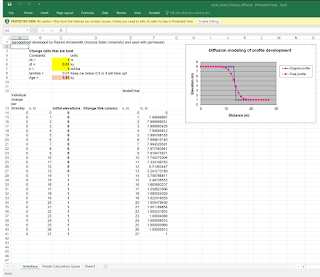 Above is the screen cap of the main interface page where the user just changes the bold cells and watches the calculations in real time. 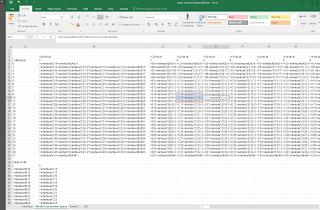 Above is the screen cap of the Model Calculation Space tab which shows the compuational engine with its fixed elevation boundary conditions and explicit centered in space and forward in time finite differences.

Here is the big spreadsheet with 250 space steps and 1000 time steps: LINK.

And, here is a video that I built to explain the general activity for Emily Apel, but it may be useful for others. It explains the two spreadsheets that are linked above.
One of the cirtical concepts that is accessible in both of these spreadsheets is the opportunity explore not only initial step models, but also continuously displaced scenarios.

Here are a few other blog posts and recent publications which might be of interest as well:

Posted by J Ramón Arrowsmith at 10:51 AM