An earthquake occurred in Idaho today 72 km west of Challis Idaho and about 120 km northeast of Boise Idaho. Based on the magnitude and location, I would think that it looks to be a classic Basin and Range earthquake rupturing along the mountain front south and west of Stanley Idaho (if it occurred along the Sawtooth fault--the closest active fault). But the focal mechanism is more strike-slip; we will have to wait for some updates.

The event was widely felt in the Intermontane west with light to moderate shaking in Boise. It was felt as far as Salt Lake City, Bozeman, and Spokane. The strongest ground motions appear to have been in the relatively low population Challis National Forest. Numerous aftershocks are expected. 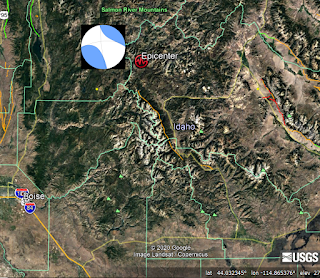 Location of the epicenter in the Sawtooth Mountains. The yellow line to the south is the Sawtooth fault. Note the focal mechanism indicating strike-slip sense of motion