January 12, 2010 was the devastating Haiti earthquake. Many are posting memories and thoughts about the event. Many others have higher quality scientific, engineering, and social science materials. I did not work on it directly but I developed a few slides for various lectures which referred to the event.

I recall a moving lecture on the event by Eduardo Fierro who had been there for post earthquake response. The video may still be accessible (I am struggling to see it here, but the PDF is available): PEER website. He made a strong point about what really caused the disaster: "The tragedy of this thing, you know, was that three days after the earthquake the city was littered with bodies and by God, we… this was not an earthquake disaster. This was a disaster caused by the construction industry in Haiti. The construction industry that did not know how to use codes, they did not have any codes, and the people that built these things, the building in very bad shape. These were the people that caused this tragedy and the loss of human life. In the past I have told people when I give talks: We have to design things and construct things and assume that our children, our grandchildren and our mother is going to be in this building when the earthquake hits. So we check all our numbers and do a proper design ." 01/26/2010, by Eduardo Fierro

I also was surprised by some of the news discussions about the relative magnitudes of the 2010 Haiti and Chilean earthquakes. The latter occured about 6 weeks after the Haiti event and was much larger. Some news reports talked about how the M8.8 Chile earthquake was 500x larger while others said 64x. Which was it? I set this up as a little exercise for my class 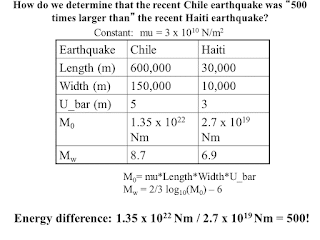 Here are all of the slides: PDF PPT

Posted by J Ramón Arrowsmith at 10:50 AM