At least 3 earthquakes (M3.2, M4.1, M4.0) occurred last night 11 km NE of Black Canyon City, Arizona (I am sorry to have missed being at a NASA meeting in Washington D.C.!). It was widely felt across central Arizona including greater Phoenix (USGS' Did You Feel Ithas >4800 responses by 3:30 am). USGS estimates 4.6M people were exposed to weak shaking.

The sequence began with a M3.2 at 8:59 pm (foreshock). The M4.1 mainshock occurred at 11:29 pm within 2 km of the foreshock. 20 minutes later and 4.6 km SSW the M4.0 aftershock occurred. An M3.1 event occurred in the area Fri May 08 2009. There are no mapped active faults nearby but the roughly north-south orientation is consistent with the bedrock geologic structure in the area and note the mapped active faults to the east (Horseshoe, Carefree, and Sugarloaf--all similar orientation 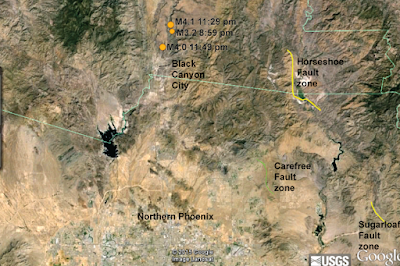 PDF of above map 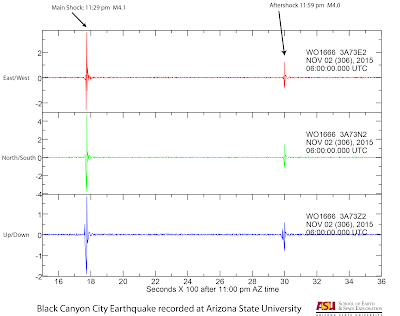 Seismogram recorded at ASU processed by John D. West. PDF of above 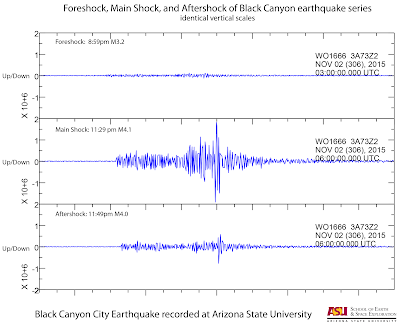 Seismograms recorded at ASU processed by John D. West. PDF of above


There is a very cool large landslide near to Black Canyon City (see this post), but the earthquakes and landslides are not associated. I would think that the slide was shaken enough to move, and certainly the steep slopes of the region should have produced some rockfalls and other mass movements from this earthquake sequence.

Here are some links for the event:

Here are some links for background on Arizona earthquakes:

Posted by J Ramón Arrowsmith at 3:02 AM