A moderate earthquake occurred today in Virginia (about 66 km NW of Richmond Virginia). It is listed as M5.9 by the USGS and was widely felt in the northeast and mid Atlantic region.

Here is the main USGS site on the event: http://earthquake.usgs.gov/earthquakes/recenteqsww/Quakes/usc0005ild.php. It looks like it was a NNE-trending reverse faulting mechanism (makes some sense with the geologic fabric and the compression directions in the eastern US).

Here is a nice NY Times article with information about the damage, a comparison of the felt effects from this event a similar-sized 2004 California earthquake (Parkfield), and a map of historic events in the eastern US (last big event was 5.4 in New Hampshire in 1940).

Watch the Did You Feel It page to see people report their sensation of the event and where.

Here is a short comment about the difference in attenuation between the east and west of North America.

It looks like it occurred within the Central Virginia Seismic zone which is an area that has produced small and moderate events in the past and is noted as a zone of somewhat increased earthquake hazard by the USGS. Note that there was an M4.5 in this area in 2003 (December 9). It was also widely felt.

Here it is relative to historic seismicity. Click on link to see it broader with explanation (from USGS OFR 2006-1017): 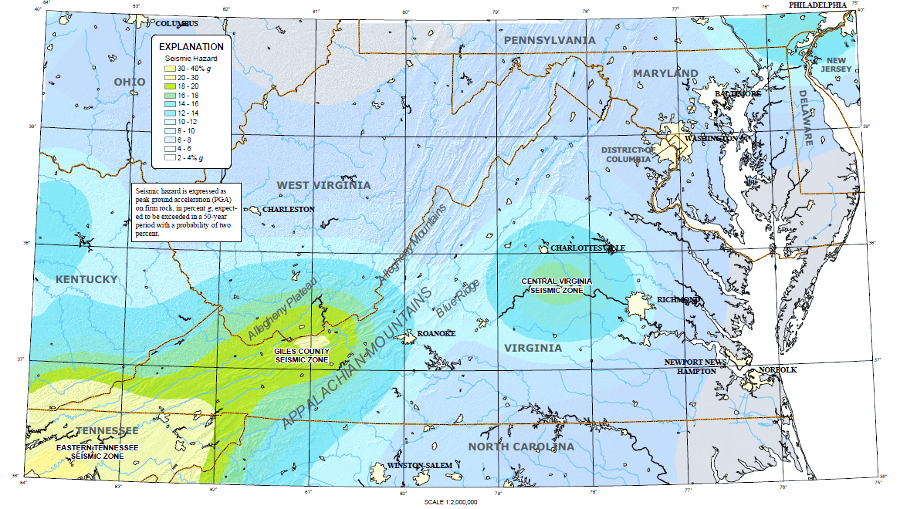 from http://www.virginiaplaces.org/geology but is derived from the USGS Open File report 2006-1017 below).

Here is a nice map and commentary from Virginia Tech on the Central Virginia Seismic zone.

Here it is recorded at Arizona State University (thanks John West):

Email ThisBlogThis!Share to TwitterShare to FacebookShare to Pinterest
Labels: Earthquakes